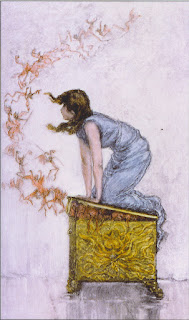 Greek mythology tells about a woman named Pandora who received a box that was supposed to remain closed. When curiosity got the best of her, she yielded to the temptation to lift the lid. Before she could shut it, a swarm of disastrous curses instantly escaped from the open box, filling the world with tragedy. In the Garden of Eden, Eve did essentially the same thing by eating the forbidden fruit.

These similar stories have another crucial similarity. God told Eve that the “offspring” of a woman would someday defeat the devil, whose deception brought death into the world. The other story tells of what was left behind in the bottom of Pandora’s box. Still awaiting release was something the world—now plagued by sickness, suffering and sorrow—desperately needed: hope. Jesus Christ fulfilled both of these expectations.

The Bible explains the nature of this fulfillment: “The reason the Son of God appeared was to destroy the works of the devil,” (1 John 3:8b, ESV). It also describes how it was accomplished: “Since the children have flesh and blood, he too shared in their humanity so that by his death he might destroy him who holds the power of death—that is, the devil,” (Heb 2:14, NIV). Through the Incarnation, God’s Son became a true human being to defeat death by His Cross. His empty tomb became the symbol of Christ’s victory over death and His proven promise of our access to eternal life. 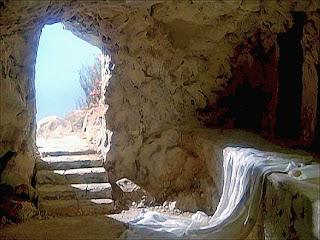 As hope was finally released from the open lid of Pandora’s destructive box, so

“Hope beckons to a death-bound human race from the open doorway of Christ’s empty tomb.”(DLH)

Forbidden fruit from a lethal tree had led humanity into death’s tomb. The promised Fruit from Mary’s womb died on Calvary’s Tree to liberate us from the realm of death—starting now by giving us spiritual life by new birth, and finishing up later by sharing His own bodily resurrection with us for eternity. This is humanity’s ultimate hope declared by history’s most human-friendly faith!

The ancient Christian salutation on Easter morning, “Christ is risen!” declares this awesome hope. The responsive return-greeting echoes our resounding faith in it: “He is risen indeed!” I pray that this hopeful faith be both in your heart and on your lips!
Posted by David L. Hatton at 1:02 PM 2 comments: