“They have gone beyond the limits of impropriety. They have invented mirrors to reflect all this artificial beautification of theirs, as if it were nobility of character or self-improvement. They should, rather, conceal such deception with a veil. It did the handsome Narcissus no good to gaze on his own image, as the Greek myth tells us. If Moses forbade his people to fashion any image to take the place of God, is it right for these women to study their reflected images for no other reason that to distort the natural features of their faces? . . . If the Lord places more importance on beauty of soul than on that of the body, what must he think of artificial beautification when he abhors so thoroughly every sort of lie? 'We walk by faith, not by sight.'” — Clement of Alexandria (150–215 AD) in Christ the Educator, 3.2.11-12


When I came across the above quote recently, it reminded me of my opinion about makeup in my early teen years. I had read and was so impressed by the following verse that I used sunlight to burn its words into a wooden plaque with a magnifying glass: 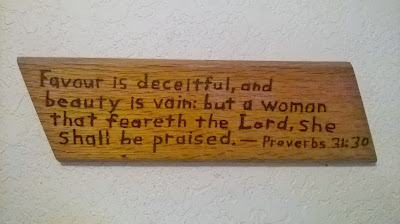 Despite the fact that this plaque still hangs in our house—directly above our bathroom mirror—its presence doesn’t keep my sweetheart from spending time in front of it trying to beautify her face. Even my repetitive avowal that she’s the loveliest woman in the world isn’t effective. Evidently her artificial beautification isn’t for me, or for God. For whom then? For the world? For herself? It may be an unconscious part of a woman’s self-identity....

I’ll never forget a mime routine Red Skelton once did on his TV show. He role-played a couple coming home from a party. First, the wife entered the bedroom and removed her painful high heels, her earrings, her wig, her imitation eyelashes, and the two falsies from her bra. Applying cold cream to her face, she wiped off her lipstick and makeup. Then, wiggling out of her girdle and setting it on the vanity with the rest of her things, she went to bed. When Red entered as the husband, he quickly and easily undressed. But before climbing into bed, he went over to the vanity, looked down at everything his wife had removed, and said, “Goodnight, honey.” How funny it was, and how informative!

My wife knew my feelings about makeup before we married. While she uses it minimally, she shares with most women in America the common habit of a facial routine before the mirror. It’s part of her culture, yes, even of her Christian culture. I remember a teacher telling me of his visit to a Christian family in Germany. At the dinner table, the wife, who had just taken a big swig from her beer mug, asked him, “Is it true that Christian women in America actually wear lipstick?” Arbitrary culture is a bigger gatekeeper on morality than Bible teachers want to admit.

But Bible teachers are mostly men, and when lax in marital devotion, they can be blatantly chauvinistic. At the university where I met my spouse, I cringed during one chapel service when the university president defended his wife’s use of makeup by saying, “If the barn needs painting, paint it!” As my sympathy for his wife rose, my respect for him fell. Maybe he didn’t intend to liken her to a barn, but his statement implied an even worse malediction: an aging woman’s face is unacceptable without artificial beautification.

Our culture idolizes the transient state of youth. Cosmetic painting has a hidden but inherent message: youthful beauty alone is beautiful. Beyond red lips, smooth skin and the absence of gray hair, this ideal encompasses other body parts. Historically, the corset was invented to narrow older abdomens to a younger size, while its two upper half-cups gave the bosom a breast-lift. When women finally salvaged themselves from the unhealthy tyranny of the corset, they weren’t wise enough to resist its twin offspring, the girdle and the braziere. These also had health risks. But with girdles making tummies appear youthfully slender and bras keeping breasts looking perky—firm and sticking out, as they were in late adolescence or early adulthood—the risks were ignored. 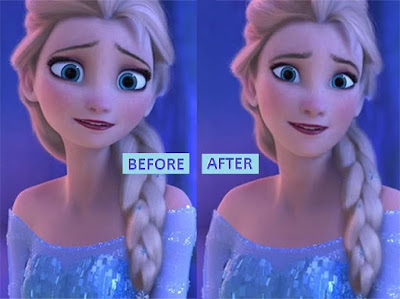 Joined to cosmetics, in the growing business of beautification, are diet programs, plastic-surgery procedures, and various skin-care technologies, all trying to remove or slow the signs of aging. But these age-erasers are not age-eliminators. They only procrastinate the attitudinal adjustment that all women must eventually make. Thinning, sagging, wrinkling skin is a future reality that every face will, sooner or later, have to face. By embracing that reality now, at any stage of life, a woman can bless herself with the special gift of self-acceptance. Accepting her face, figure and features, her skin, shape and size, along with every other part of her unadorned body, can be a time-saver at the mirror. But personally practicing body acceptance can also be an emotional life-saver, a healer of low self-esteem.

Because our bodies are temples for God’s presence and incarnations of His image, Christians should have led the way in spreading a sound message of body acceptance. Instead, secular voices have become its loudest proponents. Numerous women have given impressive TED Talks in this area.[1] But the best full-length documentary I’ve seen so far is EMBRACE (2016), by the Australian body image activist Taryn Brumfitt.[2] Without claiming a theological basis for their ideas on body acceptance, these ladies have proclaimed an essentially prophetic word calling for a healthy personal and social repentance (metanoia), a “change of mind” about their perceived body image.

Whose thinking should guide our thoughts on the appearance and appeal of our face, our skin, our shape? Shouldn’t it be the mind of the Creator who gave them to us? God is not against beauty. His salvation plan through Christ includes the restoration of physical bodies that will surely outshine the beauty of our youth. But, until Resurrection Day, we live, move, and have our being in these aging bodies, which serve as sanctuaries of the Holy Spirit. At whatever age they’ve reached or state they are in, our bodies are uniquely personal, and each one is “fearfully and wonderfully made” (Psalm 139:14).

The next time you shower or bathe, stand in front of the mirror and look with care at your naked body. It has been your closest companion in the ups and downs of life, and it might be physically showing the wear and tear of your adventures. But we should not let a preoccupied focus on chasing lost youth cause us to miss enjoying the present state and achievements of our bodies. Instead, we should rejoice in them, and heed Paul’s injunction to “present your bodies as a living sacrifice, holy and acceptable to God, which is your spiritual worship,” (Romans 12:1, ESV).

Inspiration for this concluding poem came to me in an art class on “facial expressions” after the professor decried the beauty-care industry’s use of Botox for killing nerves that controlled the facial muscles behind wrinkle formation.

Please, never treat your wrinkles
as if they were a blight.
Like stars that shine and twinkle,
they set the soul in sight.
They’re formed in special places
as journey-marks, not scars.
God paints them on our faces
as part of who we are.

[1] The following TED Talks are presently viewable on YouTube:
The lady stripped bare by Tracey Spicer
An epidemic of beauty sickness by Renee Engeln
My story is painted on my body by Chantelle Brown
Plus-size? More Like My Size by Ashley Graham
Ending the pursuit of perfection by Iskra Lawrence
The Business of Beauty is Very Ugly by Carrie Hammer
A new standard of beauty by Amber Starks
Beauty and how we're obsessed with the wrong idea by Christina Gressianu
A bold message about beauty by Michelle Serna
Stop hating your body; start living your life by Taryn Brumfitt