WHY DO THE INNOCENT SUFFER? 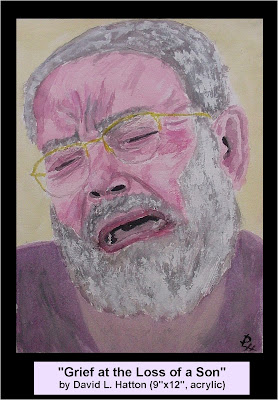 In graduate studies at New College Berkeley, I took a course on Job from the Bible scholar Francis I. Andersen. He let two assignments determine our grade. At the outset was a short essay about the suffering of the innocent. The final was to be a fully developed argument defending our personal response to this question, “Did the Lord answer Job?” With his permission I wrote an interpretive summary in drama called The Lord Answered Job, which so impressed him that he mentioned it in that year’s commencement address. Recently I put the drama on my website to be read or performed by anyone interested.

I had been reading Job on the day of the Connecticut massacre. That tragedy gave the question “Why do the innocent suffer?” a fresh context. My initial answer for Dr. Andersen’s class has not changed: God makes the best possible choice, to intervene or not to intervene, by thoroughly evaluating the direct and indirect effects resulting from the infinitesimally complex interplay of the following elements:
“No man is an island, entire of itself,” wrote John Donne, “every man is a piece of the continent, a part of the main. . . . any man's death diminishes me, because I am involved in mankind, and therefore never send to know for whom the bells tolls; it tolls for thee.”

The film classic It’s a Wonderful Life was based on this idea—how one person’s life and actions crucially affect everyone and everything around them. More recently the book Five People You Meet in Heaven—also made into a movie—expounded this same theme. Somehow, “God causes all things to work together for good to those who love God, to those who are called according to His purpose.” (Romans 8:28).

When Abraham asked God, “Will not the Judge of all the earth do right?” (Genesis 18:25), he already knew the answer. We may not see how the intertwined relationships of people, or the ongoing effects of their choices, relate to specific tragedies. But when the innocent suffer, we can be sure that God chose the best of all possible bad choices. Yes, BAD CHOICES!

In an environment where people can behave selfishly, an array of bad possibilities are all God has to choose from, unless He decides to cancel free will. Since He won’t do that, all His decisions must deal with the reality of a fallen race living in a world groaning with earthquake and storm under the curse of human sin. Instead of abandoning this sinful mess, God employs His love and wisdom to make, from among all the bad alternatives, exactly the right long-term selection in every situation.

But God did not hang aloof from this knot of interwoven human suffering. The Incarnation is His ultimate answer to our questions about His allowance of suffering. God knows exactly how it feels to be an innocent human being suffering cruelty at the hands of insane powers and fanatical injustice. His divinity diminished none of the pain that cried out, “My God, My God, why have You forsaken Me?” (Mark 15:34). His pain did not dim the divine love behind His prayer for the persecutors who mocked Him, “Father, forgive them; for they know not what they do.” (Luke 23:34).

As far as the suffering of the innocent or the injustice of some of our own pains, God is patient with our doubts about the rightness of His choosing to let them happen. After we reach the afterlife, He has an eternity to explain His reasons. But it might absorb a few eons of our heavenly bliss for God to unravel for our finite understanding what was obvious to Him in the fragment of a nanosecond. He could start with the closest and end with most distant contingencies related to the event in question, showing us one-by-one the weight of each in the cosmic balance of good over evil. When the last interconnected item is measured, we will invariably sigh that long interjection of acknowledgment that C. S. Lewis said would be one of the most familiar utterances heard in Heaven: “Oh-h-h. . . .”

Over the years, I’ve had many why questions I wanted to ask God someday. But as I grow older, they become fewer—not because they’ve decreased in number, but because I’ve increased in trust that the God of all the earth will do right. And if there remains any pains, any open wounds, any vestiges of grief, any tearful sorrows, He has already promised to wipe them out so thoroughly that they will hurt us no more (Revelation 21:4). Beyond the astronomically long explanation we might receive for our questions and doubts, such an ultimate and absolute comfort for affliction is as much as can be provided by God’s perfect love and wisdom, given the reality of unalterably interrelated human choices and actions in a fallen world.
Posted by David L. Hatton at 4:45 PM No comments:

The condition of same-sex attraction (SSA) is not synonymous with the campaign of gay activism. In fact, gay politics has been notoriously unkind to those whose perplexity with SSA causes them to pray for a transformation that would bring opposite-sex attraction. I'm writing this both to validate those hoping God will answer such prayers and to invalidate the arrogant dogmatism of those trying to discourage them.

Gay activists, following a plan documented as far back as the 1970s, have infused their agenda into almost every agency of social influence. Yet true science still thwarts their attempt to make SSA a new “norm.” Atypical examples extracted from nature to authenticate homosexuality are not norms of the natural order, but rarities. Political leverage alone turns them into mandates for redefining human sexuality.

Profiting from its momentum in destabilizing the ancient, trans-cultural concept of marriage, gay activists are now working to eliminate the social vocabulary that differentiates gender into “male” and “female.” This makes science the next logical target for political deconstruction, since this terminology is categorically scientific. As far as gay logistics, science has always created obstacles. It categorizes homosexual behavior itself as psycho-social in origin, not biologically natural. Science defines sexuality in mammals only in terms of complementary sexes. As far as sexual union, it doesn't occur except from joining the reproductive components of opposite, not identical, genders.

No, nature won’t march to the beat of a fictional drum, even to placate power politics. Lesbian couples still get pregnant the physiologically correct way: by uterine implantation of a female egg fertilized by a male sperm. Indeed, SSA may initiate an interpersonal bond between those of the same gender. Using the genitals to express that relationship can even bring mutual orgasmic pleasure. But the absence of real sexual union forbids true science from calling such intercourse sexual, just as all traditional cultures refuse to acknowledge such a union as a sexual marriage. The body’s biology and history's collective cultural wisdom are not tricked by modern emotional or political semantics.

Despite the above arguments, it may soon become a political hate crime to call persons “male” or “female.” But isn’t hate also a motive in the obliteration of scientific terms for gender distinction? Perhaps hate is too harsh a word. Anger might be more accurate. Where’s the anger about SSA really coming from? Obviously many are disgruntled by the gay agenda. But what about those who are experiencing SSA?

How upsetting it must be for someone with SSA to live in a body whose every cell ceaselessly exclaims, “I am physically a male!” or “I am physically a female!” The irritation has led some to try smothering the loud voice of their visible anatomy with hormones and reconstructive surgery. But from cradle to grave, nothing can stifle the cry of gender-identity embedded in DNA. Without exception, the same genes that determine the development of a person’s sexually distinct body parts reside in every single cell of the body.

The truth is that there definitely is hope for change, hope for healing. Why? Because God’s grace is still amazing! But the steps to hope and grace are also logical and understandable. One of those healed through the Pastoral Care Ministries seminars (now Ministries of Pastoral Care) started by Leanne Payne was Mario Bergner, who wrote Setting Love in Order: Hope and Healing for the Homosexual. He and several other PCM speakers, whose talks are available on CD, formerly had SSA and are cogently articulate in leading others out of it.

The emotional pain of this conflict between brain and body is understandable, for the unity of body and soul is a measure of psychological well-being. But the body’s incessant contention that the brain’s SSA is biologically incongruent with one’s physical sex cannot be silenced by politics. Even if the meaning of gender becomes as thoroughly altered as the original concept of the word gay, political redefinition can bring no true bio-psychical peace. Distorting gender distinction to soothe intrapersonal pain is as cruel as calling the body’s discord with SSA gaiety to make the brain laugh. For those wishing their SSA could be banished, neither is helpful nor humorous.

The cruelest aspect of gay activism’s power, however, is in how effectively it blocks those who wrestle with this internal anguish from seeking a reversal of SSA. At all costs, testimonies of real change through therapy, either human or divine, must be suppressed. A new normal will not survive, if there’s legitimate hope for healing. Those who claim it must be portrayed as impostors. Those who proclaim it must be labelled as perpetrators of homophobic hate. All is lost if dreams of therapeutic reintegration with his or her gendered body can really come true for the person with SSA.To maintain its credibility, the gay political platform must mentally barricade any exit the gay lifestyle. “Once gay, always gay, to your dying day!” Fortunately, such dogmatic slogans are just noisy smoke billowing from a feverish fear of the truth.

God wants us all to be whole spiritually, psychologically, and physically. For now, bodily healing is temporary and limited—becoming ultimate only in future resurrection. But God provides for wholeness of spirit and soul during this life. When SSA leads to sins of sexual immorality, He offers forgiveness. But in itself, SSA is not a sin. It’s merely one of the many human conditions that need the divine healing which God's grace brings into our fallen world. The problem has never been God’s inability to save and heal, but always our reluctance or resistance to come to Him.

People with SSA need to know they have a choice. Yes, they can choose to trust in gay politics to make them “feel better” with new meanings for words like marriage or gender. Or they can put their faith in the hope offered by Jesus Christ, the Savior and Healer, Who asks everyone of us the same question: “Do you want to get well?” (John 5:6).
Posted by David L. Hatton at 1:51 AM No comments: