TWO "MEANS OF GRACE" FOR HEALING

“When once passion takes part in the game, the human reason, unassisted by Grace, has about as much chance of retaining its hold on truths already gained as a snowflake has of retaining its consistency in the mouth of a blast furnace.”
— C. S. Lewis (1898-1963) 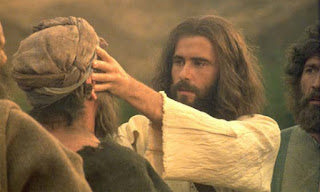 Time heals no wounds, but God can heal all wounds in time. He does this in various ways, as illustrated in Christ’s ministry. Jesus frequently ordered sicknesses to depart. Sometimes he just prayed. Often He used touch. Once He smeared mud made with His saliva on a blind man’s eyes and had him go wash it out. He straightened one woman’s back by casting out a demon. Another woman grabbed His outfit to get the healing she needed.

In theology, these diverse patterns of divine blessing are called means of grace, often connected to a physical action or item, as was the staff in the hand of Moses. To use means of grace as Jesus did, we must have His attitude: “Truly, truly, I say to you, the Son can do nothing of his own accord, but only what he sees the Father doing. For whatever the Father does, that the Son does likewise,” (John 5:19, ESV). We are never above Christ. Which means of grace to use, and how to use it, must come on a case-by-case basis through divine guidance, as it did with our Lord. 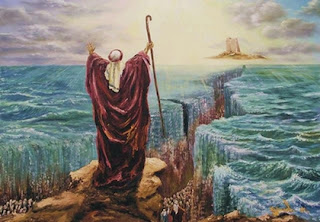 This concept will be a faith-stretch for some. Many believers are so mesmerized by modern materialism that they entrust all aspects of health to science, technology, and the pharmaceutical industry. But behind the material world is a spiritual one, and each affects the other. This is especially true for humans, who are body-spirit beings.

All creation—especially the human body—reflects God’s glory. God uses the physical spiritually, and the spiritual physically. He’s not bound by Greek philosophy’s dualistic separation between the material and the spiritual, which guides much modern thinking. Through a sacred, wholistic approach, the following ideas, instead of dividing body and spirit, assist with healing, based on their interrelationship.

Baptism and a Sacred Use of Water

Early church fathers considered removing clothes for the nude baptism ritual to be a symbolic divestment of worldly ways for entrance into the new life of God’s Kingdom. It was a complete water bath, a sacramental sign of sins being fully washed away (Acts 22:16; Heb 10:22). Just as we enter and leave this world naked, so new converts were stripped for baptismal burial with their nakedly crucified Savior. Coming out of the water naked, just as newborns exit the womb, signified not only new birth but resurrection with the risen Christ (Rom 6:3-4), who left His grave wrappings behind when He exited the tomb. This was some of the rich theological symbolism invested in the ancient practice of nude baptism.[2]


But prudery infiltrated the church. The well-documented attitude of early monks toward the tempting sight of the opposite sex points to a major cause for the disappearance of this practice. As monastic values toward the body became more popular with church leaders, they eventually supplanted the early church’s officially prescribed nude baptism. This robbed baptism of much of its symbolism and meaning as a means of grace. Perhaps pornography wouldn’t be the problem it is today, if churches had maintained the heritage of body acceptance underlying nudity in the ancient baptismal ritual.

If you were led to faith in Christ by someone who failed to encourage you to obey this command of Christ (Mat 28:19), don’t let that stop you from being obedient now. Baptism is still a burial and still a bath; use it as such. Approach baptism as a sacred death to your old way of believing and living. Use it as a symbol of cleansing from the stains of false, worldly thinking. Let your addiction to porn be buried with Christ. Then, rise up from the water clean and fresh and alive to the goodness and sacredness of not only your own body but that of everyone else. Wash away your porno-prudish mindset. Be clothed with the mind of Christ, and forever after begin to look at the bodies of others only through His eyes.

The Old Testament prescribed the use of sanctified water for ritually cleansing places, items and people (Num 19:17-18). Some faith communions still practice a sacred use of water in their prayers for spiritual cleansing. Houses, rooms, closets, computers, and other things and places—even though they are physical in nature—can become spiritually “unclean” through the presence or depiction of evil things, such as pornographic pictures and videos. These defiled locations may need cleansing prayer with the symbolic application of water ritually dedicated by prayer for this special use. Sacredly applying water on a person’s body can become a strategic symbol of spiritual cleansing similar to that pictured in baptism. I heard one evangelist instruct people receiving this kind of ministry to “let this holy water put you in mind of your baptism.”

Another ritual use of water is foot washing. Oddly, many Bible teachers and church communions ignore it as a spiritual means of grace, even though Jesus implied its need (John 13:10), exemplified its practice and clearly enjoined its perpetuation: “If I then, your Lord and Teacher, have washed your feet, you also ought to wash one another’s feet. For I have given you an example, that you also should do just as I have done to you,” (John 13:14-15, ESV). With some preparatory instruction, a foot washing ritual might be joined with cleansing prayer as a powerful, sanctified use of water. 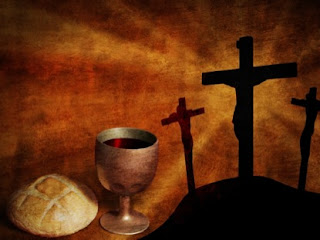 Early church fathers saw the Eucharist as a continuation of baptism. Baptism declared the death of our old life in the world and the birth of our new life in Christ. Holy Communion repeats this theme by inviting us to participate in the ongoing ministry of death and life through the Bread and the Cup, which represent the work of the Cross. It repeats baptism’s symbolism by reminding us that we died with Christ and are alive in Him (Gal 2:20). But, mystically, it also provides “a participation” (1 Cor 10:16) in His sacrificial death and bodily resurrection for our ongoing spiritual nurture. All Christians should meditate upon this, as they observe Communion. But they should also realize how effectively the Table can serve as a powerful means of grace for many spiritual needs.

First, we should bring to the Table and leave with our crucified Lord those things in our lives that need to die. Then, we are enabled by His grace to take from the Table the fruits of His Cross and Resurrection and to “feed upon Him in our hearts by faith with thanksgiving,” as the Book of Common Prayer exhorts. There’s still much of the world in us that needs death, and much in us that needs death to the world (Gal 6:14), to make room for more of Christ’s life. The Table invites us to a sacred rendezvous where God spiritually enables this ongoing death-and-life process to take place in us.

Holy Communion should never become a routine observance. It must always be a vital transaction of faith, where we bring more of ourselves to the Lord’s Table and take more of Christ’s life as we leave it. Eucharist is the transliterated Greek word for thanksgiving and comes from the root word charis, or “grace.” As a means of grace, how much closer to the Cross can we get than to the Body that hung there or to the Blood that was shed on it? Whether we theologically conceive of Christ’s presence as, by, with, in, or through the physical elements displayed, Jesus directly instructed us to feed upon Him (John 6:53-57), which we are to do by faith at each celebration of His Table.

The Communion Table represents Christ’s Cross quenching sin’s penalty and His Resurrection breaking through sin’s power. Together they divided historical time, ended the Old Covenant and began the New, answered the Law’s demands with grace, and drew an eternal line between death and life. Nothing gets past the Cross without death, and nothing rises up to life from that death without the power of Christ’s Resurrection.

This is why His Table—which sets before us Christ’s work on the Cross as a physical means of grace—is a place of divine deliverance and edification. Whatever has wounded your soul sexually can find healing here, even the self-inflicted damage of yielding your heart to pornographic lust. 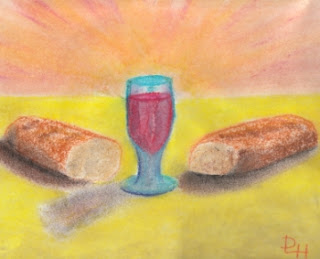 Bring and leave on the Table all your years of porn addiction, then from the Table take Christ’s Body and Blood as spiritual nurture for your new life in Him. Leave on the Table any lie that resists the exorcism provided by rational truth, then from the Table feed upon Him who is “the Way, the Truth, and the Life.” Discard on the Table any defiled mental images from the past that haunt your memory, then from the Table feast upon “the express image of God” in the Body of His Son. As you approach this sacred Table, bring to it anything in you that needs to die. Then, with all your heart, feed upon “the Lamb of God who takes away the sin of the world.” Drink the Blood that Christ passionately poured out for the Church, His Bride, who—in the one-flesh relationship manifested by this Meal—is also called His Body (1 Cor 10:17). Don’t let theological fears or this Table’s mystery keep you mentally aloof from receiving its grace and power.