THE FIRST ADVENT: THE INCARNATION

“The Incarnation Blows My Mind!” 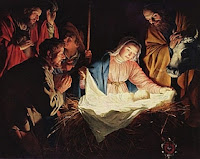 The physical nature of the human body and its sexuality are major components in God’s plans. He created the race of Adam as an alloy of matter and spirit. This incarnate amalgamation prepared us to be special mediators between the cosmic and the celestial worlds. As body-spirit beings “created in the image of God,” we were to serve as the Triune Godhead’s unique representatives (Gen 1:26). Our job was to bring physical and spiritual creation under a single, universal, government. So crucial was this divine plan that, when it got off course, God became human to fulfill it.

For over 30 years the Incarnation has never ceased to blow my mind! The eternal Word, Creator of all things, actually “became flesh,” (John 1:1-2,14). The Second Member of the Trinity became the Second Adam (1 Cor 15:45), “firstborn” (Col 1:15) of a new human race. Jesus Christ is now the human King who will lead redeemed humanity in ruling over “a new heaven and a new earth” (Rev 21:1).

The Incarnation has magnificent implications for human destiny. But the bodily aspects of God’s strategy have often been ignored. Religious infatuation with Gnostic ideas has exalted the spiritual to the exclusion of the physical. God’s goal is to bring the two into unity, and His express manner of doing so is through the body-spirit nature of humanity.

The Sexual Physiology of the Incarnation

The Bible is biologically correct. Avoiding human sexuality and its anatomical realities as a religious taboo is neither biblical nor Christian. Yet the popular, even traditional, exclusion of sexuality from theological thought has caused many to overlook what actually occurred in the Incarnation. 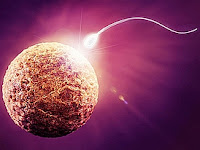 Right after the Fall, God promised a Savior who would be a woman’s “seed” (Gen 3:15)—not a man’s offspring. The virgin Mary descended from Abraham, in whose “seed all the nations of the earth shall be blessed.” (Gen 22: 18). But Mary’s DNA also carried the genetic code from Adam, which she contributed to the Incarnation in an ovulated egg. In this way, Jesus sexually inherited from Mary the nature of Adam’s fallen race as half of His unique human nature.

A biologically functional conception did in fact occur (Luke 1:31), but Mary’s egg was not fertilized by a sperm from Adam’s fallen race. Although authentically human, it wasn’t from an earthly man. Joseph was told, “that which is conceived in her is from the Holy Spirit” (Mat 1:20, ESV). Genetically, the other half of Christ’s human nature, was formed by God. This newly created human “seed” was not of this world. But Scripture’s revelation that Mary had a true conception implies that this totally new, divinely created human sperm—or at least the exact complementary human DNA material necessary for a real conception—was the location where “the Word became flesh.” If this is where God entered cosmic creation, where He physically embodied His personal and divine Identity, then when that new human DNA joined with the ovum of Mary, the Son of God became one of us, a true human being.

Biology and theology dovetail here. God formed Adam “of dust from the ground and breathed into his nostrils the breath of life, and the man became a living creature,” (Gen 2:7, ESV). In the same way, God’s Spirit [“breath”] directly fashioned and vitalized this holy haploid of human DNA. I personally believe God had no qualms about becoming an authentically fleshly sperm and carrying out the DNA transfer in the normal way of conception. But regardless of how it happened, the genetic material in that transfer—although truly human, sexually functional, and equipped with the gene determining male gender—was not a part of our fallen world. It was an entirely new creation and the beginning of a new humanity. 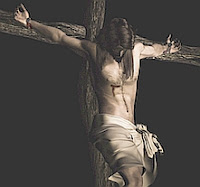 This was no mere supernatural manifestation. God really did become one of us, with a human body, a human soul, a human spirit. But in His Incarnation—this strategic union of the old human race with a new humanity—Jesus came to die. His nature as a sinless new Adam allowed Him to pay for fallen humanity’s sins (2 Cor 5:21). But His union with the fallen human race allowed Him to take Adam’s nature [“our old man”] to the Cross with Him (Rom 6:6). The sacrifice of His dual humanity provided exactly what sinners need: freedom from both sin’s penalty and its power.

Salvation isn’t automatic. It resides only “in Christ,” and we access it only by personal faith. (Gal 2:20; Phil 3:9). But Christ’s bodily Resurrection shows that it isn’t limited to the spiritual realm. Nor is faith in Christ limited to heart-belief, for “with the mouth confession is made unto salvation,” (Rom 10:9-10, NKJV). As bodily signs of our faith in Him, Jesus stipulated both Baptism (Mat 28:19) and Holy Communion (Luke 22:19-20). Yet both these body-focused sacraments go beyond illustrating His plan to resurrect and glorify our physical bodies (1 Cor 15:42-43). They exemplify God’s original intent for the spiritual and the physical to be brought into unity. Faith and works do not stand and cannot be understood separately (James 2:14-26). Trust and obey are as divinely wedded as the “one flesh” union of human marriage, and what “God has joined together, let not man separate,” (Mat 19:6, ESV) 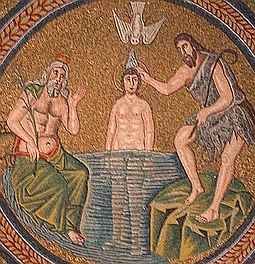 As a Christian rite of initiation, water baptism uses the body to declare faith. But Paul goes deeper, expounding its metaphysical ability to unite us with Christ’s death, which is valid only if Jesus actually took our old Adamic nature with Him to the Cross:


Do you not know that all of us who have been baptized into Christ Jesus were baptized into his death? We were buried therefore with him by baptism into death, in order that, just as Christ was raised from the dead by the glory of the Father, we too might walk in newness of life. For if we have been united with him in a death like his, we shall certainly be united with him in a resurrection like his. (Romans 6:3-5, ESV)

Christ’s words about Holy Communion were so physically shocking that they turned away many early followers. Some otherwise faithful Bible teachers still balk at taking them at their face value. But if our personal, faith-filled baptisms put us into Christ, uniting us with His incarnational death of the old human nature, then our ongoing, faith-filled nourishment at the Lord’s Table puts into us His new resurrected life as the Second Adam: 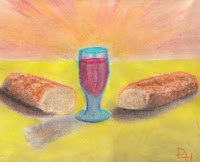 These words are no surprise. Early on, God said we do “not live by bread alone, but man lives by every word that comes from the mouth of the LORD,” (Deut 8:3, ESV). If spiritually true of His written Word, how much more eagerly should we spiritually feed on the living Word Incarnate?

The Son is back in heaven sitting beside the Father. But now a Human Being fills the seat. Christ’s Incarnation and Resurrection introduced physical humanity into the Trinity. Jesus left Heaven to obtain a human Bride. As in the first Adam’s deep sleep, when God opened his side to create Eve (Gen 2:21-22), so in the Second Adam’s sleep of death on the Cross, His side was opened to create the Church.

Our destiny, as redeemed humanity, is corporate marriage to the Son of God, whose genetic conception on earth wedded Adam’s flesh to a new humanity. His bodily Resurrection empowers those who receive Him to become God’s spiritual children by new birth (John 1:12-13). But we join all of creation in eagerly longing for redeemed humanity's full manifestation, when we receive “the redemption of our bodies” (Rom 8:19-23), bodies that match the resurrected body of our Bridegroom (Phil 3:20-21).

The first Advent brought us the Incarnation, and because of it, the second Advent will bring us a Wedding. When Jesus returns to reign, those united to Him by faith will be literally taken into the Trinitarian Family as in-laws. Forever married to our Husband-King, the incarnated God-Man, we will be the new humanity ruling with Him over all the realms He has ever created or will create.

In the meantime, to those who don’t have this faith and hope,