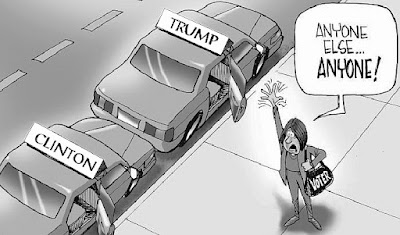 I’m a pastor concerned about God’s Kingdom, but also a citizen who cares for our nation’s welfare. Like the ‘voter’ in this cartoon, I’m worried. Am I alone in feeling unusually depressed about this presidential election year?

Mr. Smith Goes to Washington (the 1938 movie) left me deeply suspicious of politics. A later film, Dave (1993), echoed the message that rich business interests control both elected officials and the media. If true, then such powers this year made sure that a ‘Mr. Smith’ wouldn’t be running. J. F. Clarke said, “A politician thinks of the next election; a statesman, of the next generation.” Controlling interests never want true statesmen in office.

Pessimistic? Yes, but it reminds me of optimism about another kind of vote. Political debates can distract us from important outcomes that depend on us personally. Each of us has spheres of influence, areas of direct responsibility. In these, our decisions effect ourselves, others, and eternity. Only we can make these choices. It’s our soul’s vote alone.

With the choices offered by our media-driven political system, I’m sure God won’t judge our success in life by our apathetic or reluctant voting. But if we join our cry to the cartoon lady’s “Anyone else...,” Jesus might reply, “How about electing Me as Executive?”

Christ is indeed the best Choice for life’s administration. He can balance our budget without taxing our energy. He’s a Commander-in-chief who will defend us against spiritually foreign foes. His governing offers “life, liberty, and the pursuit of happiness,” as well as peace —but it’s a peace that begins in us, as we obey His law of love. Let’s cast our prayer-vote for Jesus to run the country and our lives.
— Pastor David Hatton
Posted by David L. Hatton at 12:09 PM 2 comments: