Many Christians, including myself, began the year 2020 hoping it would be one of 20/20 vision, a year for gaining a clearer perspective on God’s will and purposes for us as His people. The verse prefacing this article encourages us not to despair of that hope. What the Apostle Paul proclaimed to Timothy predates all the fearful crises of history that followed its writing and still tells us what thwarts the “spirit of fear” that typically accompanies all such critical times.

When frightful dangers do take control of the mind, panic is the result. But God gave us “a sound mind,” one equipped with the spiritual fruit of self-control. This divine inheritance should distinguish our response to dangers from that of a worldly reaction, as Paul makes clear in Romans 8:15 (NKJV), For you did not receive the spirit of bondage again to fear, but you received the Spirit of adoption by whom we cry out, “Abba, Father.” Pressing down on one side of the contemporary scales is the authentically bad news of a global plague. On the other side of the scales is the infinitely weightier Good News of who we are in Christ. But, before examining how our identity as God’s children tips the balances, I want to discuss another balancing act between bad news and some better news that is currently in effect for everyone. 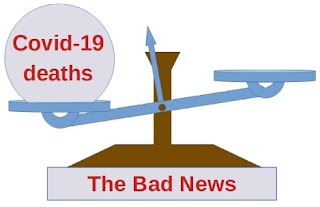 Despite heated disputes about the political and medical nature of this present pandemic, the bad news is very harsh: many more will die from Covid-19. Neither the growing fears broadcast by mainline media nor the reassuring rebuttals proclaimed in social media will prevent Corona-virus-related deaths from mounting. Yes, traditionally wise hygienic practices may slow the spread. But none of the public’s confidently debated opinions—about the need for masks or their risks, social distancing or its ineffectiveness, lock-downs or their socio-economic dangers, vaccine development’s possibility or impossibility—will eliminate these tragic deaths. That’s the bad news. 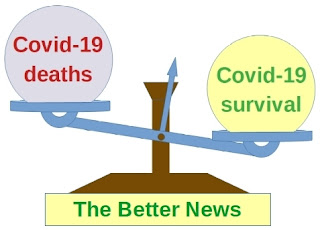 In the midst of this crisis, however, there is some better news that is more hopeful: most who get infected with the virus will survive. That statistical reality decreases with age, especially with those of us who are approaching or have surpassed the average human life expectancy. These same morbidity-rate statistics have characterized other epidemics, as well as life in general: the elderly always die at a higher rate than those younger. But the news media’s focus has been on the deadliness of the virus and not on the survival rate. That one-sided emphasis is a contributing factor in this pandemic becoming a panic-demic. Our stressed-out society needs some encouraging news right now. Hearing that only a low percentage of those contracting Covid-19 will die from it is a much needed encouragement.

But, while the bad news is outweighed by this better news, there’s actually worse news than what we’re facing from this current pandemic. In fact, it’s what most people feel is the very worst news. Yet, there is also some much better news than surviving Covid-19, for those who are willing to believe it. In fact, it’s the best news on the planet! The worst news is already well known but usually ignored: sooner or later, all of us will die. The best news is divinely true but often doubted: because of what Jesus Christ did for us, we do not have to be afraid of dying. 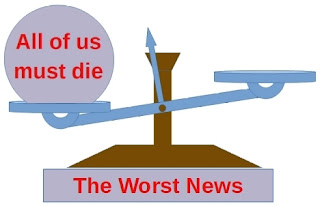 Death is a universal reality. It isn’t increased by lethal diseases, by acts of violence, or by unforeseen accidents. Such fatalities do shorten our personal lifespans, but regardless of what form death takes, it is always 100% effective in removing each person from this planet. This is much worse news than the bad news of the Covid-19 death-count. The fact that it’s really just the same old news we’ve always known about doesn’t trivialize everyone’s suffering from this pandemic, but it does offer us a realistic perspective on the limits of earthly life.

We will each die from something, and the odds are that it won’t be from the CV-19 bug. This virus should not be identified with the Grim Reaper. It is merely a new tool of his for maintaining human mortality. But the broadcast focus on his recent use of it has made some people stop watching TV’s bad news reports altogether. This popular media-boycotting may not be so much a way of ignoring the contagion as an attempt to find some peace of mind. Such a motive would be a tacit statement that humans do not thrive on morbid fear but on hopeful faith.

This is where the best news comes in, at least for those willing to believe in what was accomplished by the Incarnation, Cross and Resurrection of Jesus Christ. Because of Romans 3:23 and 6:23, Christians know that “all have sinned and fall short of the glory of God,” and that Jesus countered sin’s universal sentence of capital punishment on the human race: “For the wages of sin is death, but the gift of God is eternal life in Christ Jesus our Lord.” These basic Bible teachings confront the inevitability of earthly death with the divine provision of heavenly life. 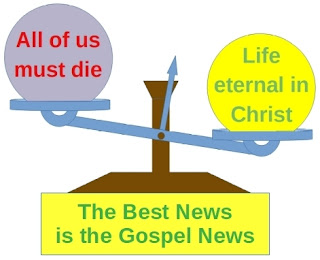 Putting trust in Christ provides not just forgiveness for sins but a life where death need no longer cause fear or panic. Hebrews 2:14-15 (NIV) explains why this is so: “Since the children have flesh and blood, he too shared in their humanity so that by his death he might destroy him who holds the power of death—that is, the devil—and free those who all their lives were held in slavery by their fear of death.” Until Resurrection Day, bodily death will continue, even if a CV-19 infection is survived. But for Christian believers, death is no longer a frightening terminus. Departing from this life escorts us into the presence of our Savior and Lord.

Having healthy fear is a necessity, especially when it alerts us to moral and mortal dangers that God wants us to avoid. Jesus was highlighting healthy, godly fear, when He said, “My friends, do not be afraid of those who kill the body, and after that have no more that they can do. But I will show you whom you should fear: Fear Him who, after He has killed, has power to cast into hell; yes, I say to you, fear Him!” (Luke 12:4-5, NKJV). But, because anxious human fear is unhealthy, Jesus also told us in Matthew 6:34 (ESV), “Therefore do not be anxious about tomorrow, for tomorrow will be anxious for itself. Sufficient for the day is its own trouble.”

Despite these troubled and trying times, those following Jesus should not cave in to this pandemic’s panic-demic. We are not called to imitate those who, by rejecting faith in Christ, are still “held in slavery by their fear of death.” This global crisis is indeed extremely troublesome and tragic. But it’s only one episode of trouble in a world that has been full of tragedy ever since our first parents were banished from Eden. Whether or not the gatekeepers of modern media continue to inspire fear with bad news reports, believers must heed and hold on to what our death-conquering King told us in a special verse that we should all memorize: “I have told you these things, so that in me you may have peace. In this world you will have trouble. But take heart! I have overcome the world,” (John 16:33, NIV) In a poem I wrote some time ago (“Be of Good Cheer”—the KJV’s rendering of the NIV’s “take heart”), I expand and expound these personal words that Jesus spoke for our encouragement. It pictures Jesus telling us how we need to respond to critical challenges like those imposed by this viral plague. Its rhyming lines also offer an apt conclusion for my intent in this article. My goal is not only to keep my Christian brothers and sisters from letting this pandemic fill their lives with panic and pandemonium, but to encourage them to be living and dying witnesses to unbelievers who do not yet share our faith and marvelous hope in Christ.

Trials and tragedies, trouble and pain,
Hopes that are dashed amid dreams that are slain:
All of these pepper the world where you dwell,
Making your life just a little like hell.

Satan may threaten, and demons may swarm,
Yet I am with you in tempest and storm.
This I will promise: your heart will have peace,
As you let go in My Spirit’s release.

Yes, there is darkness, disease and despair
Marring My beautiful world everywhere.
That’s why I came, to connect with each loss
By the embrace of My sin-laden Cross.

Be of good cheer in the Message you’ve heard.
Others have suffered who knew not My Word.
Others are hurting who still know Me not—
Yours is the cross that can light up their lot.

Take tribulations and trials you face . . .
Plunge them in love by the strength of My grace.
Follow My path, when the suffering grows.
Cherish the Cross! It will conquer your foes!