THE CRÈCHE AND THE CROSS 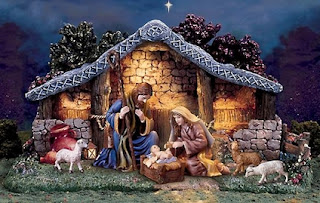 The Nativity scene, or “Crèche,” was once a common American sight during the Advent season, not only on church properties but in homes and town squares. Today, secularization has banished its presence from many public places and governmental locations. Yet Christmas has survived the political “humbugs” of modern scrooges, despite how its true meaning is often lost in the annual busyness of holiday activities. 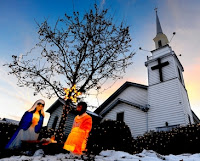 When set up inside or outside a church, Christ’s Crèche may be in visual proximity to His Cross. Both sights, taken together, offer crucial insight into the true meaning of Christmas, as expressed in John 3:16 (NKJV), “For God so loved the world that He gave His only begotten Son, that whoever believes in Him should not perish but have everlasting life.”

The name Christmas comes from “Christ’s Mass,” a Eucharistic celebration to honor the birth of Jesus. Yet the bread and wine on the Table is a spiritual “communion” with His body and blood, sacrificed on the Cross to purchase salvation for all who believe. It was a divine plan: Jesus was born in Bethlehem so that He could die on Golgotha’s hill.

In 2006, while taking Holy Communion at a Christmas Eve service, I was meditating on Christ’s words in John 6:54-56, “Whoever eats My flesh and drinks My blood has eternal life, and I will raise him up at the last day. For My flesh is food indeed, and My blood is drink indeed. He who eats My flesh and drinks My blood abides in Me, and I in him.” It put this bond of the Crèche with the Cross to the forefront of my thoughts, and on Christmas Day I wrote the following poem:

Last night I fed on Christmas in the broken bread and wine.
I tasted sacred nourishment that brought God’s life to mine.
With thoughts of Mary’s holy Child, by candlelight and songs,
I worshiped at the Table where all Adam’s race belongs.

I pondered how the sweetness of our Lord’s nativity
Should never be seen separate from His death upon the tree;
How God, wrapped up in human flesh, sojourned with human need,
How hands that sculpted human form could feel our pain and bleed;
How incarnation taught Him through life’s weariness and sweat;
How only after learning these, He chose to pay our debt.

Last night I fed on Christmas, and the strength I gained was real.
Our present peace and future hope draw meaning from that Meal.
Our banishment is ended; our empty lostness gone.
The Babe and Lamb of Bethlehem is Whom I feasted on.

When I wrote that poem, the union of the Crèche and the Cross wasn’t new to me. I had poetically tried to capture the same concept 14 years earlier in another, longer poem. In it, I attempted to intermingle Mary’s heart of grief at the foot of the Cross with her remembrance of the Christmas story as recorded in the Gospels:

Time suspended, time that stops
In between the crimson drops:
As they tumble to the ground
Somehow she can stare around
Seeing scenes of yesterday,
Hearing angel’s words that say,
“Highly favored, have no fear!
From your virgin womb this year
By the Spirit’s power alone
Comes the King for David’s throne,
Sinner’s Savior, Holy One,
God Almighty’s only Son.”

Then, the words her cousin told
(As it trickles red and cold,
His life-blood before the tomb),
“Blest, the fruit that fills your womb!
Blest are you of womankind,
Mother of our Lord Divine!”
And her song sung in reply,
“My soul praises God on high!
In my Savior I rejoice!
Making me His humble choice,
Causing all to call me ‘blest,’
God has done for me the best!
Mighty is His holy name,
Ageless grace, and endless fame!”

As she stands before His cross,
Feeling pain, heart-rending loss,
She remembers public shame,
Pregnant with no man to blame.
She recalls dear Joseph’s care:
Taught by dreams her task to share,
How he guarded her from scorn
Till the baby boy was born . . .
Worried when her pains began
As they came to Bethlehem,
He implored each house and hall
Just to find a stable stall.
In its filth the baby came
’Neath an oily torch’s flame.
Wakened by a holy light,
Shepherds visited that night.
Angels beckoned them to run
To the town to find the One
Called the Christ whose wondrous birth
Brought down Heaven’s peace to earth.

On the hill called Calvary
Witnessing his agony,
Aching with a dreadful sob,
Hearing laughter from the mob,
She, with other women’s tears,
Weeps and dreams back through the years
To the visit of the Three:
Magi from the East to see
Little Jesus on her lap
Swaddled in a woolen wrap.
Frankincense and myrrh and gold,
“Royal presents,” they were told.
One day he would reign as King. . .
How could they have said this thing,
When with torment now he cries
Up to cold and silent skies?

Darkness gathers, shadows fall,
Thunder echoes with his call. . .
Mournful cry: “My God!  My God!”
She falls prostrate on the sod.
Then she somehow overhears
Whispered words that ease her fears,
Words that re-ignite the dream
Shattered by her son’s last scream.
“It is finished!” he had cried.
Now the guard that pierced his side
Whispers when the deed is done,
“Surely He was God’s own Son!”

Mary keeps that faithful word
In her thoughts until she’s heard
Peter tell her, “He arose,”
Smiles, and nods as if she knows. . .
How could it be otherwise?
And again her heart replies,
Filled with overwhelming love,
“My soul praises God above!
In my Savior I rejoice!
Making me His humble choice,
Causing all to call me ‘blest,’
God has done for me the best!
Mighty is His holy name,
Ageless grace, and endless fame!”

In my 25 years of helping laboring moms in the hospital, I had to work half of my Christmases. It was always a sentimental thrill to see babies delivered on the day set aside to celebrate Christ’s birth. The joy of their entry into the world, however, could be dampened by knowing that each of them would someday have to face their departure from this life. But that same contemplation on Christ’s Creche and Cross—and the hope they together offer to the human race—makes a Christian’s journey from the cradle to the grave extravagantly hopeful.

Christmas reminds us of that hope, if we have placed our trust in Jesus, the Babe of Bethlehem and the sacrificial “Lamb of God Who takes away the sin of the world.” As the Advent season closes the old year and initiates a new one, so faith in Christ ends an old self-directed life and begins a new God-directed one. And, as my favorite quote at Christmastime says:


“Though Christ a thousand times in Bethlehem be born,
If he’s not born in thee thy soul is still forlorn.
Should Christ be born a thousand times anew,
Despair, O man, unless he’s born in you!”
— Angelus Silesius (1624-1677)