When my wife showed me the cover of TIME Magazine (5\21\2012) with a lactation consultant exposing her breast to nurse her 3-year old son, I saw it as an opportunity to preach on one of my favorite American controversies: the visible breast. 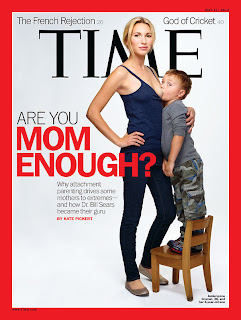 Such an “in your face” photo! TIME surely knew it would have “shock value” for marketing, despite their stated purpose of celebrating Dr. Bill Sears, the champion of maternal attachment. Online articles about it popped up everywhere, followed by public comments of prudish criticism, perverted congratulations, and sometimes practical commendation, like mine. Bravo for TIME, but especially for courageous Jamie Lynne Grumet, who showed the American public what God created breasts for! 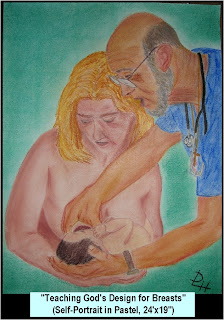 “Teaching God’s Design for Breasts” was an art class assignment that depicts one of my routine tasks: helping topless mothers get their newborns latched on by skin-to-skin nursing. I also intended this self-portrait to SHOCK, but only so it could HEAL. This normal, non-sexual part of my job stands in stark contrast to the way society exploits women's breasts. That many women themselves see their breasts as sexualized objects indicates the degree to which this perception of women's bodies controls our culture.

I grew up with America’s sexualized view of breasts. Later, I pledged religious allegiance to exactly the same view under a new name: prudery. My experience as an RN, especially in teaching moms to breastfeed, cured me of both. I feel privileged and liberated to participate in the reality of God's primary purpose for women's breasts. For a small window of hospital time, I watch first-time moms experience that freedom, too, as they learn the truth about breasts. I encourage them to remember that truth and freedom as they reenter a culture that treats their breasts as sexual commodities. Assertive breastfeeding moms have a unique opportunity to force our society to face its immaturity. By openly nursing their infants and toddlers, they can teach the next generation of American citizens to see breasts wholesomely, as normal parts of the female anatomy and as beautiful organs divinely designed with the potential of nurturing babies.

America’s sex-obsessed focus on breasts is seen by some world cultures as ludicrous. I think of it as toxic. Our cultural prudery promotes a pornographic view of the human body, and we need both spiritual and educational reformation. Everyone’s feelings and reactions to breasts and breastfeeding have been culturally learned. Through my work and my research, I’ve learned body acceptance, thus breast acceptance. If prudish and perverted views were merely harmless opinions, I’d let this issue go. But they're not. Both treat women as sex targets, and both dishonor the Designer of breasts. So, till I die or the Lord returns, I'll keep denouncing this great American obsession and keep telling nursing moms to openly demonstrate to our dysfunctional and immature culture what women’s breasts are really for.

(There’s more about this issue in my essay: “Teaching God's Design for BREASTS - A Message about ‘the Visible Breast’ for Christian Leaders.”)
Posted by David L. Hatton at 8:25 PM