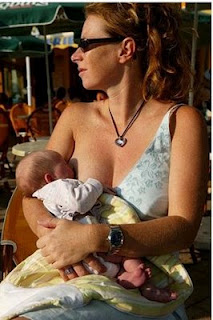 Blind to how culture shapes thinking, many Christians teach that men are compelled by the sin nature to lust at the sight of women’s bodies, especially their breasts. If this doctrine was true, it would eliminate from fallen humanity all societies where breasts are customarily naked in public. This ridiculous falsehood is further exposed by the response to it from these cultures themselves. 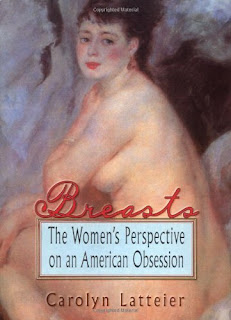 Carolyn Latteier, the author of Breasts, The Women’s Perspective on an American Obsession, wrote that “we do have a peculiar obsession with breasts in this culture. A lot of people think it’s just the human nature to be fascinated with breasts, but in many cultures breasts aren't sexual at all. I interviewed a young anthropologist working with women in Mali, a country in Africa where women go around with bare breasts. They’re always feeding their babies. And when she told them that in our culture men are fascinated with breasts, there was an instant of shock. The women burst out laughing. They laughed so hard, they fell on the floor. They said, “You mean, men act like babies?”

This false theology may sound funny to them, but to me it’s emasculating. As a man who has helped tens of thousands of women nurse their newborns, I’ve never lost any male appreciation for the beauty of breasts or for the part they play in God’s awesome design of femininity. Yet, even at the outset of my nursing career, I realized I wasn’t reacting to them in the lustful way I’d been taught to expect! My culture had fed me a lie, and that deception came most consistently from the same lips that preached the Christian Gospel.

The bottom line is “we’ve acted like babies!”—not in a ludicrous way that made bare-breasted women in Mali laugh—but with such utter immaturity that we should be shedding tears. How could we, who claim to honor the Creator, so decadently degrade His anatomical wisdom and artistic design in the female breast? How could we—by social and religious precept—lead generation after generation of children to turn their natural, wholesome attraction to breasts into a lifelong perverted obsession? This ungodly behavior calls for repentance!

Immodesty isn’t the occasionally naked breast but the exploited one, strategically hidden or partially revealed by social custom. The habit of making breasts visible only for sexual activity socially defines them as avenues of sexual enticement. More modesty is shown when they’re laid bare for nursing on a crowded subway, exposed for modeling in an art class, or uncovered for sunning on a clothing optional beach. Treating unclad body parts realistically and respectfully is always modest. But when clothing is unnaturally trusted as a moral prevention for lust, then immodesty infects a whole culture, as it has ours. Our mistaken morality wraps the body up in a fantasy that tempts sinners and saints alike. I believe God abhors it.

Did you grow up with our culture’s pornographic view of breasts. Your only hope of expelling it from your mind and heart is by learning to see breasts the way their Designer does. His view is the truth, and only the truth will set you free.

(This article was originally written for the MCAG Blog. For further reading, see “Teaching God’s Design for Breasts—A Message about the ‘Visible Breast’ for Christian Leaders,” and “The Pornographic View of the Body.”)
Posted by David L. Hatton at 12:01 AM